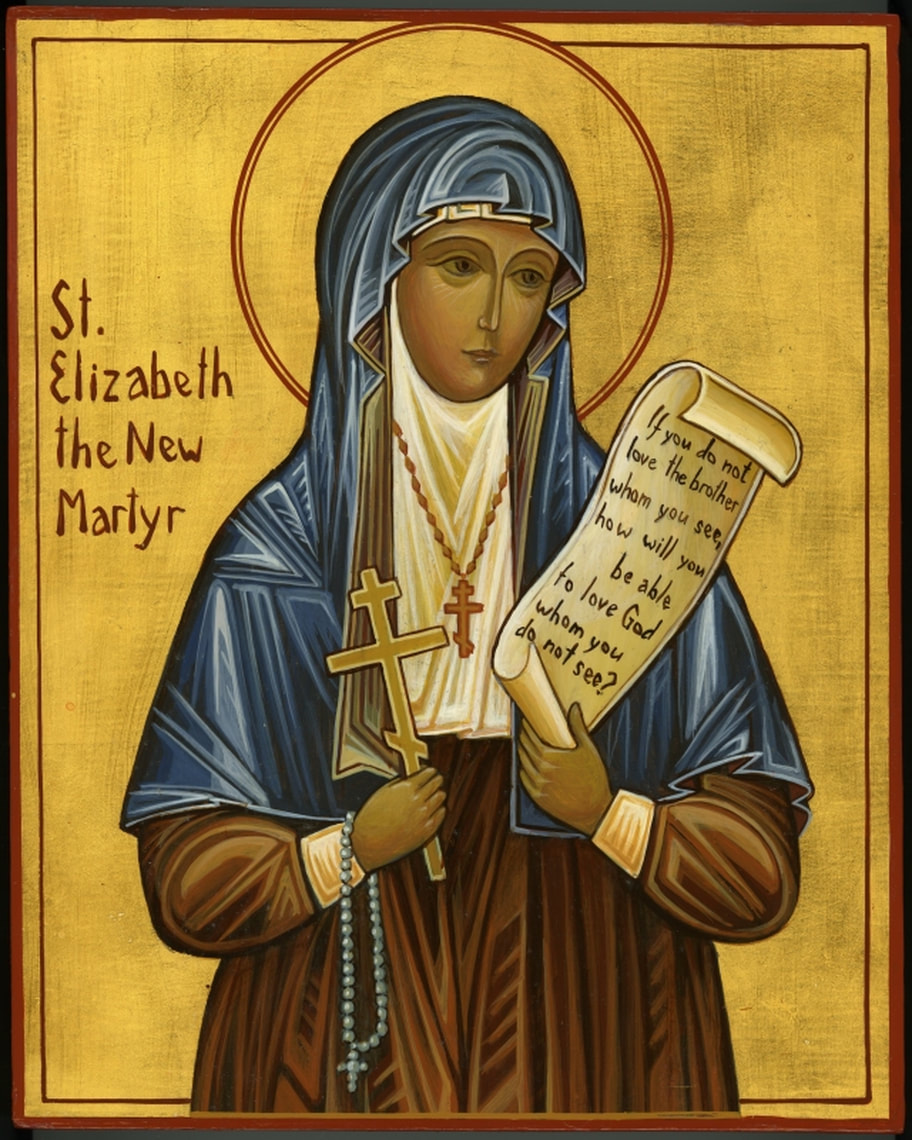 St. Elizabeth was born in 1864, the second of seven children. She was the daughter of Ludwig IV, Grand-Duke of Hessen-Darmstadt and Princess Alice, daughter of Queen Victoria. At the age of nineteen, in 1884 Elizabeth married the Grand Duke Sergei, son of Emperor Alexander II of Russia. That same year, her husband was appointed Governor of Moscow.

Sergei actively supported the Russian Orthodox Mission in Palestine, building schools, orphanages, and churches and providing aid and support for Arab Christians. Elizabeth also devoted herself to charitable work, caring, in particular, for victims of war. They continued this way for 14 years. Then, in 1905, on the way to work one day, Elizabeth heard a loud explosion. Her husband had been murdered in a political assassination.

The shock of Sergei's death caused a profound change in Elizabeth. On the day of his funeral, she arranged free meals for the poor and homeless of Moscow. She frequently visited her husband’s assassin in prison and even brought him a copy of the Bible.  As expected, the government pressed for a speedy execution. Elizabeth passionately defended the killer’s life, pleading for mercy from the authorities. Eventually, she lost this struggle and her husband’s assassin was executed. Soon after, she abandoned her royal title and withdrew from social life, drawing public criticism and the disapproval of her friends.

Using her wealth and personal resources, Elizabeth purchased a home and a large piece of land in Moscow, where she established a community dedicated to Sts. Martha and Mary. She wanted her new community to reflect the table fellowship and hospitality of the home of Martha and Mary, which was visited by Christ in the New Testament, and where our Lord shared a meal with their brother Lazarus.  Women from all classes joined Elizabeth, devoting their lives to the sick and to the poor and becoming surrogate mothers for the street children of Moscow. Like the great deaconess, St. Olympia (who was also a widow) Elizabeth gave all her wealth to charity.  She established a rent-free hostel for young women workers and students, a free hospital, a clinic, a school for nurses, a library and a soup kitchen. She had hoped that her ministry might help revive the ancient vocation of deaconess: women ordained for merciful service.

As in the case of St. John Chrysostom, Elizabeth faced powerful opposition from both government and church authorities. Responding to public criticism of her new social ministry, Elizabeth wrote: ​

“This is no new creation or concept; neither do I depart from the Church traditions.
I only repeat what the Church teaches; for it is Christ who said, ‘Love your neighbor’, and the divine Theologian who thundered, ‘If you do not love the brother whom you see, how will you be able to love God whom you do not see?’”

In 1909, Elizabeth’s community was formally established as the “Convent of Mercy of St. Martha and St. Mary.”  That day, Elizabeth addressed her companions, “I am leaving the brilliant world where I occupied a high position, and now, together with all of you [my sisters], I am about to ascend into a much greater world, the world of the poor and afflicted.” Elizabeth and the other sisters visited the sick, did housework for struggling families and took care of abandoned children, visiting the poorest and most dangerous parts of Moscow.  She took Sergei’s place as president of the Russian Palestine Society, continuing his ministry to Palestinian Christians and looking after the needs of Russian pilgrims to the Middle East. Elizabeth also established a community garden for children on the convent grounds. Writing of her ministry in a letter to Tsar Nicholas, she said, “I am espousing Christ and His cause. I am giving all I can to Him and to our neighbors.” In 1910 Elizabeth was made Abbess of the Convent, which by then was home to 45 sisters.

When the Revolution came in 1917, Abbess Elizabeth continued to live as before, boldly preaching the Gospel in Moscow, attending church services, nursing the sick and caring for the poor. She turned down the offer of a Swedish Cabinet Minister to leave Russia, saying that she wished to share the destiny of her country and its people. At first ignored by the Bolshevik regime, on the third day of Pascha in 1918, the Abbess Elizabeth was ordered to leave Moscow. That same day, Elizabeth had shared her last visit with St. Tikhon.  Almost immediately after he left the convent, a car with commissars and Red Army soldiers came to arrest her. Escorted by the guards, she was taken to the town of Alapayevsk where she was imprisoned together with two nuns, Catherine and Barbara. From her cell she wrote letters of encouragement to the sisters in Moscow:

“Remember everything I told you, my dears. Always be not only my children, but obedient disciples. Keep together and be like one soul - everything for God - and say like St. John Chrysostom [as he was sent into exile]: “Glory to God for all things!” I live in the hope of being with you again soon and I want to find you all together. Apart from the Gospels, read the letters of the Apostle, together.

“The Lord has found that it is time for us to bear His cross...blessed be the name of the Lord.”

Elizabeth and her companions were imprisoned in Alapayevsk on May 20, 1918, until the fateful night of July 18. It was the feast-day of St. Sergius of Radonezh, her husband's namesday.  That night, Elizabeth and Barbara were murdered, along with five members of the Imperial Family and their secretary.  The sisters were blindfolded, beaten and thrown alive into a mine-shaft along with the others. Elizabeth was the first to be thrown in. As the soldiers mocked Elizabeth and beat her, she repeated the prayer of Christ:

“Father, forgive them, they know not what they do.”

This was also the inscription engraved on the cross she planted at the site of her husband’s murder.  After pushing their victims in, the soldiers tossed hand grenades down the mine.  Like the early Christian martyrs, mortally wounded, Elizabeth was heard praying and singing hymns to God until the following day.

In September, the White Army liberated Alapayevsk and discovered the mine. The soldiers found the body of Elizabeth, not at the bottom of the 200-foot deep mine-shaft, but on a ledge about fifty feet down. Elizabeth was lying next to the Grand Duke John. It was later discovered that she had attempted to dress his wounds before her own death.  On her chest she held the icon of Christ which had been given to her by Sergei on the day of her chrismation.

Much earlier, Elizabeth expressed her desire to be buried in Palestine, at the Convent of St. Mary Magdalene in Gethsemane.  She had been with Sergei at the consecration of that very church in 1888. Through the patient efforts of her elder sister, Victoria, Marquess of Milford Haven, Elizabeth’s body was moved to the Middle East for burial. In January of 1921, her relics were solemnly received in Jerusalem by Patriarch Damian, Russian, Greek, and Arab clergy, members of the British authorities and innumerable Orthodox faithful. To this day, her relics are kept in that church, where they are venerated by faithful from throughout the world.